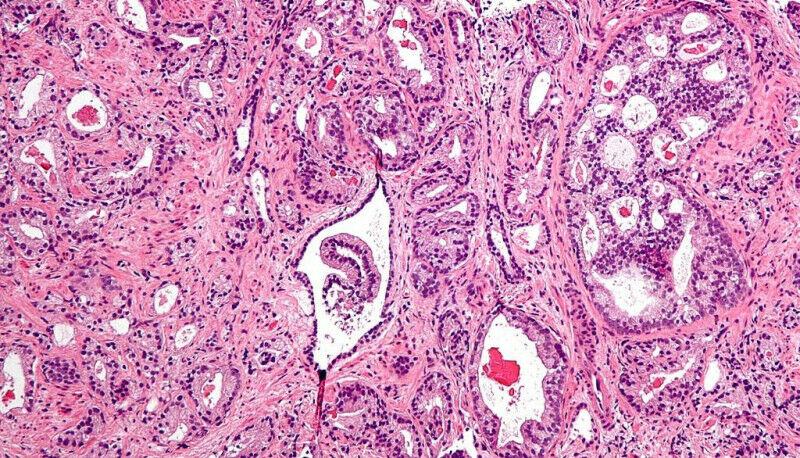 This microscope image shows cancer cells in a section of the prostate.

Researchers at Laval University have discovered markers and genes associated with resistance to a hormone treatment commonly given to people with prostate cancer. These advances, reported in an article published by NAR Cancer, could lead to better use of this treatment and the development of new, more effective cancer treatments.

Hormone resistance is common in prostate cancer and other cancers. This resistance leads to the proliferation of cells that do not respond to treatment, thus promoting the recurrence of the cancer and the formation of metastases.

The first line consisted of cells that respond to enzalutamide (ENZ). This molecule is used in hormone therapy to block androgenic hormones such as testosterone. Its action slows the progression of prostate cancer and prolongs life expectancy.

The second cancer cell line was resistant to this treatment: the cells did not respond to the ENZ molecule and continued to proliferate.

"Most researchers who study resistance to hormone treatments focus on the changes that occur in gene expression - the transcription of DNA into RNA - when resistance occurs," says Professor Hussein. These studies measure the levels of messenger RNA in the cell. However, this data alone does not identify changes in gene expression that are critical for resistance. So we had the idea to look one step further in the process by studying how the translation of messenger RNAs into proteins changed when resistance to the ENZ molecule occurred."

The researchers also discovered a new class of markers associated with ENZ resistance. "We observed the presence of long noncoding RNAs outside the nucleus of cells, which is never seen in healthy cells. As the name suggests, long non-coding RNAs should not be translated into proteins," explains Professor Hussein. In ENZ-resistant cells, these RNAs are translated into short proteins, peptides. When we induce the expression of these peptides in ENZ-sensitive cells, resistance occurs."

These fundamental advances could have clinical implications on two levels. First, they may guide the nature of treatments offered to patients. "Genes overexpressed in resistant lines and long non-coding RNAs outside the nucleus are indicators of resistance to ENZ. Therefore, alternative treatments should be considered for patients in whom this is observed," Professor Hussein points out.

On the other hand, these resistance markers can guide the search for new treatments. "If new cancer drugs do not increase the expression of the candidate genes we have identified or the translation of long non-coding RNAs, there is less risk of developing resistance to treatment," he says.

Personal stories of health risks got students to stop vaping - 27.01