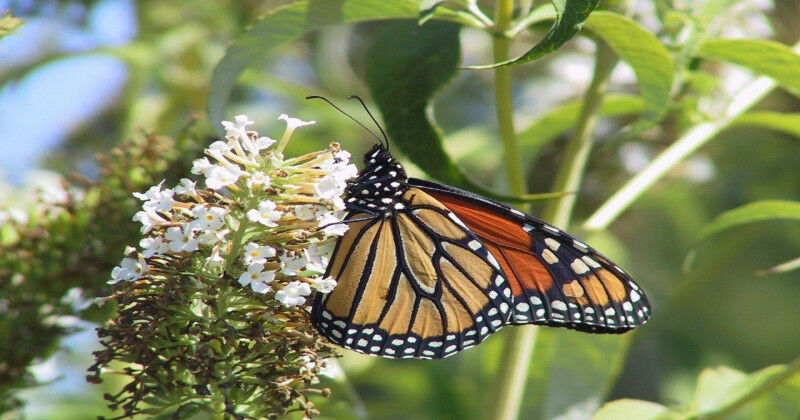 A Monarch Butterfly is seen on a flower. (Provided by Jeremy McNeil)

Climate change has wreaked havoc with many species’ life cycles and now a pair of Western students is shedding light on how it’s affecting the survival of two high-profile insects. Working under the supervision of biology professor Jeremy McNeil, master’s student Campbell McKay is looking into how feeding on different milkweed species could affect the probability that Monarch butterflies born in the fall migrate to their overwintering grounds in Mexico.

In the last few years, lingering summer temperatures have led some fall butterflies to mate rather than migrate, and their offspring - if they survive - emerge too late for their own good. Meanwhile, fellow master’s student Cailyn McKay (no relation) is showing how higher temperatures might doom the true armyworm, a crop pest that farmers would dearly love to be rid of.

First up, the armyworms. These insects spend winter in the southern U.S. and migrate to Canada and the northern U.S. in the summer. The adult moths lay their eggs on grasses and grains, and when the eggs hatch the larvae begin feeding on the plant. They chew large holes in leaves and can consume entire fields.

Their Achilles heel is that they don’t do well at temperatures above 30°C. In hot weather larvae and moths can move in search of cooler sites, but at the pupal stage between larva and moth the insect is vulnerable. Lacking legs or wings, they have no way to get out of the heat. "The pupae are kind of stuck," said Cailyn McKay.

With an increasing number of days reaching 30°C or more in southwestern Ontario, McKay wondered what effect prolonged heat would have on the reproductive ability of moths emerging from the pupal stage.

In the lab, she exposed some pupae to 30°C for 48-hour spells at four different times during their metamorphosis. She then compared the ability of the emerging moths to reproduce with that of moths that hadn’t endured sustained periods of 30°C. Not only did the moths from heat-treated pupae produce fewer eggs, but those eggs were less likely to be fertile.

McKay also dissected the females to count the spermatophores inside them. These are packets containing sperm and nutrients that the male transfers to the female during mating. The casings remain in the female’s body.

In this way, McKay was able to determine how many times females had mated, and she found those exposed to high temperatures mated less often. She hopes the next step of her research will uncover the mechanism behind that less frequent mating. She and McNeil suspect it has something to do with how heat affects the pheromones emitted by both females and males.

"Females emit pheromones to attract a mate,” McNeil said, "and on arrival males produce an odour that the female uses to decide if she will accept him or not.”

While a reduction in armyworm numbers might seem like a good thing to farmers, the insects are native to Canada and an important part of our ecosystem, McKay said.

"These guys aren’t invasive. They’re just really bad when they come in large numbers. Birds and spiders eat them so their absence could have a ripple effect on other species."

The relative absence of Monarch butterflies is already a cause for concern. This summer International Union for the Conservation of Nature declared the once-pervasive insect endangered. One contributing factor could be longer-lasting summer temperatures, which may signal to the butterfly that it’s time to breed instead of to migrate to Mexico for the winter.

Most eggs laid in the fall die as larvae or pupae, and those that survive to become adults "are often deformed and not likely to be able to migrate," said Campbell McKay. For the very few normal adults that emerge in late October or early November, it’s too late to make it south before the cold kills them. They are a dead-end population.

Temperature is not the only factor, however: the quality of the host plant also influences Monarchs’ development. While their larvae feed only on milkweed, there are several different species of the plant in Ontario and they differ in quality.

Campbell McKay is investigating how feeding on each of the three common species of milkweed affects the size of the dead-end population of Monarchs in any given year. He suspects at least one of the milkweed species may slow Monarchs’ development and cause the butterflies to emerge later in the year.

With a high school project headed to orbit, first-year University of Toronto student embarks on an academic exploration - 28.11
Sophisticated genomics could give food crops an edge in the arms race against pathogens - 23.11
UBC releases 2021 animal research statistics - 10.11
This site uses cookies and analysis tools to improve the usability of the site. More information. |